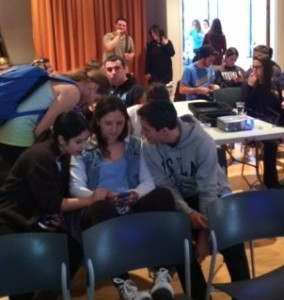 When I was asked to lead a discussion section about turning engagement with Holocaust memory into action on February 5th, I didn’t know the day was designated Digital Learning Day (#DLDay). So, it was fortuitous that I had planned an hour about the relationship between witnessing, activism and technology.

For 4 weeks in the 10 week Winter Quarter, about 150 UCLA undergraduate students meet with local Holocaust survivors for lunch. Throughout the quarter, the students share more than kosher Hillel lunch with these survivors, they share stories that reveal the past.  The Bearing Witness program has been bringing students and survivors together for lunch since 2007 and has evolved from a small student led initiative to a credited-class and has become so popular that there is now a lengthy wait list. Half the students enroll for university credit and meet on off weeks with Professor Todd Presner. The other half voluntarily meet with survivors and on the off week, gather to discuss the experience. A former student of mine invited me to lead one of these volunteer discussions and it happened to be #DLDay.

I started the discussion with a traditional question for considering Holocaust memory in any context: what does it mean to be a witness? And, I challenged them to consider their participation in the Bearing Witness program as a kind of responsibility. The conversation was slow to start, it seems not many of them had thought about the responsibility of passing on a survivor’s story and the act of witnessing that they were engaged in.

But, when I turned the discussion to the use of social media as a response to “What can I do?” things picked up. We debated multiple points of view, thinking about the value of twitter for non-profit organizations engaged in advocacy work, the “passive” activism of tweeting news links, the power of tweeting at your elected representatives, and the potency of twitter and Facebook in places like Syria and Egypt. Just as I had hoped, our conversation circled back to considered if twitter could be a site for witnessing and I was happy to see that, although they agreed that social media (YouTube included) could offer access to first hand accounts of human rights violations, more than a few students were skeptical about whether that access translated into action or political will.

In learning about the Holocaust (in particular) and genocide (broadly), we often associate technology with systematic murder. In the stories these students were committed to hearing every other week, they would learn about trains and gas chambers – two examples of technological modernity that facilitated a death machine. They could also study the way the telegraph facilitated organized deportations during the Armenian Genocide or how the radio inspired hatred and violence leading up to the Genocide of the Tutsis (a name change which I learned about on twitter). But, instead, we learned about how the digital world can help us stay informed and become active voices not only in the fight against genocide, but in the fight against bullying and aids and in the fight for refugee aid, all of which allow us as individuals to transform stories of past injustices into present day action.

There’s a lot I can say about the thought students gave to what they should or could take away from a concerted dialogue with Holocaust survivors, but since I’m honoring #DLDay here, let me say one final thing about how we thought through the possibilities for witnessing and action through technology: We looked at George Clooney and John Prendergast’s Sudan Satellite Sentinel project as both a bold attempt to use technology to prevent genocide and as an example of how the relationships between technology, witnessing, and celebrity resonate as modern approaches to “never again.” The project (which documents violence in Sudan by satellite in order to “sound the alarm” for intervention) employs technology as a watch dog, but the students pointed out that having documentation of violence doesn’t change the interest of governments to get involved. However, the access to this kind of documentation – made public on the project’s website and made popular by George Clooney (who, in fact, talked about the project Tuesday night on the Late Show) – could convert public interest into political advocacy. And, that relationship is what makes the project powerful and the students responded to the project’s own tag line: The world is watching because you are watching.

We ended with this idea that acting as witness, whether its through talking with Holocaust survivors, watching YouTube videos, or checking in on satellite imagery, can be an form of activism and that using technology to do so can empower individuals in their everyday lives.

This discussion was inspired by this video, created by the last year’s Bearing Witness participants that raises questions about witnessing and documents action pledges of student participants.