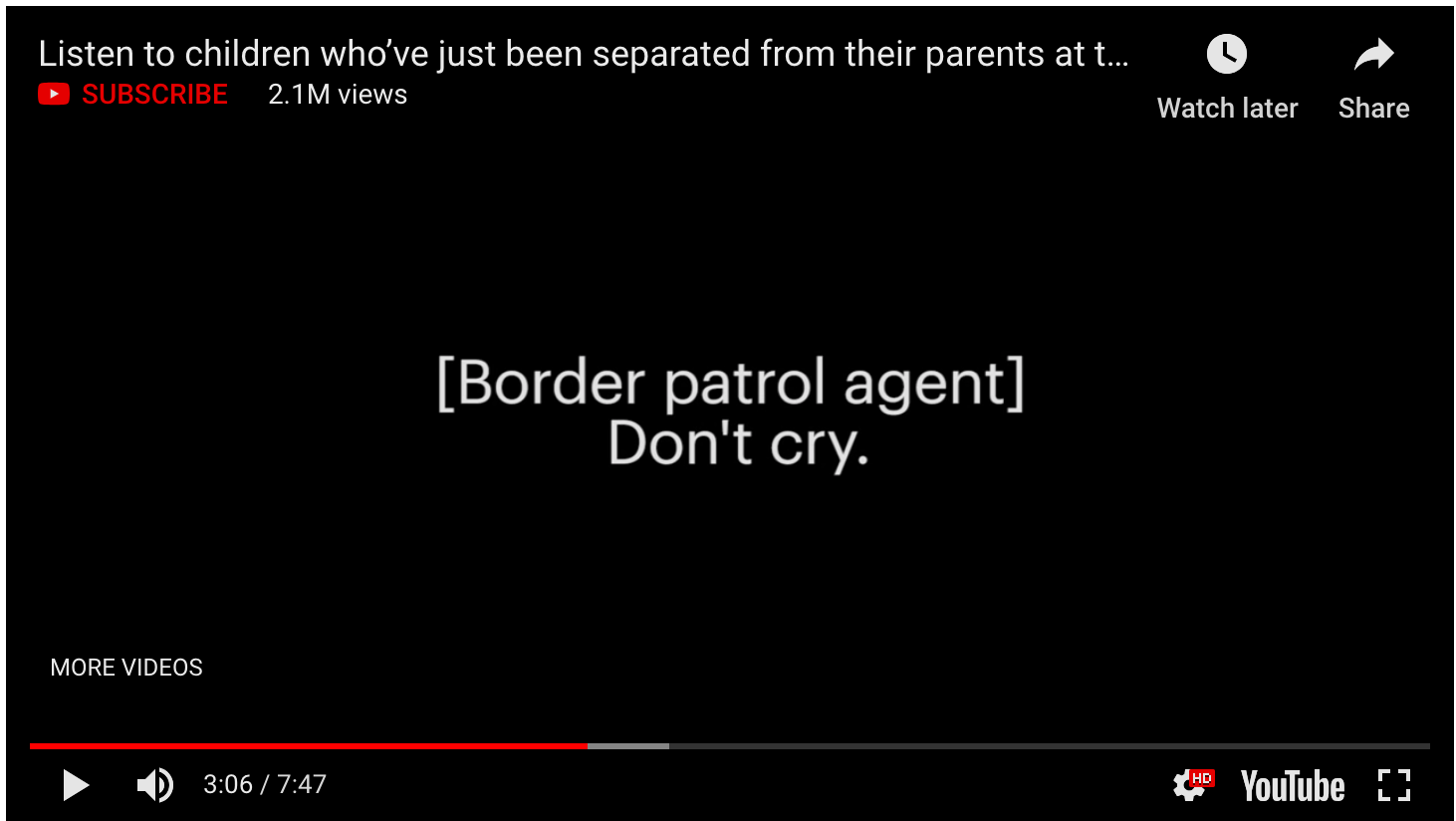 This is an academic place to start, I admit it. But, I’ve been thinking a lot about Giorgio Agamben’s Remnants of Auschwitz lately. In particular, this sentence: “We will not understand what Auschwitz is if we do not first understand who or what the Muselmann is – if we do not learn to gaze with him upon the Gorgon.”[1] It is not because Auschwitz serves as a direct historical reference for the detention centers and tent cities currently detaining children and migrants across the U.S. (although I do think the longer history of the Holocaust offers important historical analogues). Rather, Agamben’s urging to gaze upon the Gorgon serves as a reminder that we must look at what only the victim can see. We must look with intention; we must not turn away from the horror and cruelty. In the midst of the immigration crisis, I am ashamed and angry that this Gorgon is here, in my country. But, I cannot turn away.

Let me explain: in The Drowned and the Saved, Primo Levi writes at length about the Muselmann – the concentration camp inmate who had given up or lost his life force – who was no longer a “living being.” Levi says that those who were left to bear witness after the war could only bear partial witness, because “we are those who by their prevarications or abilities or good luck did not touch bottom.”[2] The Gorgon was what the victims saw, what those who were not as lucky faced. We can use David Boder’s 1949 title to see this more bluntly: “I did not interview the dead.”[3]

I’ve been thinking about this lately because there are many Gorgons and it is hard to look. And, of course, it is easy to turn away.  I am afraid to look at just how badly our government is treating people seeking shelter in our country. I read about the policy of separating children from their family, of babies ripped from their parents arms, of mothers and fathers being told that their children are just going to take a bath and never brought back. And, yet, I am still hesitant in the face of the real horror. I have been afraid to look too closely at the pictures coming out of Casa Padre; I have been afraid to see the eyes of children who do not know where their parents are or why they have been taken away.

Most of all, I have been afraid to listen to the cries of these children as they are separated from their parents. For the past week, I scrolled past the headline that ProPublica published an audio recording of children – including a 6 year old girl pleading to call her aunt and other children screaming mommy, mommy, mommy – but I didn’t listen. I couldn’t. Because I am a human being, with a heart, and what’s left of my emotional stability would be wrecked by knowing that this trauma was being done in my name, with my tax money, in my country.

But, of course, to be a person of conscious in this country today requires that we stare into the Gorgon; that we contend with the reality of this inhumane immigration policy. I must listen to those voices and those cries, because without doing so, how can I understand what is happening? And without understanding the cruelty and horror of this policy, how can I actively work against it? So, I listened and I wept. I also read the follow up with hope and horror: the 6 year old girl in the audio clip – Alison Jimena Valencia – has been connected (though not reunited) with her aunt and, through her, her mother. But, why should a 6 year old be responsible for her own salvation? And, what of the other children? What of those who don’t know their relatives names or numbers? What of those who cannot yet speak and advocate for themselves?

It is with these questions in mind that I will keep voicing opposition to the treatment of asylum seekers, migrants, and refugees in this country. To do so, I must listen and watch even though I am afraid and even though I am already angry, because to bear witness is the very least I can do.

So, today, on Day 3 of #30daysofaction, I’m donating to ProPublica, because a free and independent press is essential – now and always. Because we cannot fight what’s happening in our names unless we know what’s happening.