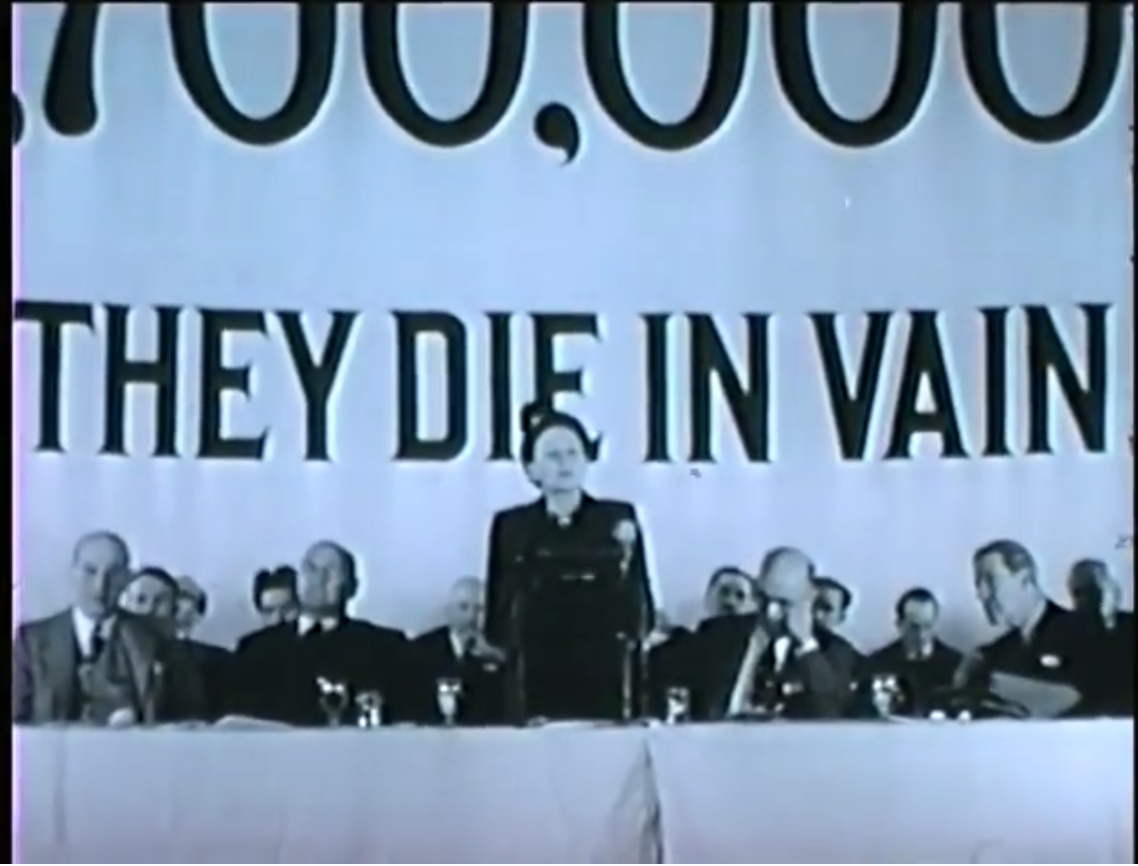 Let me start with some historical context: At the December 1945 United Jewish Appeal conference, Jewish leaders from across the country and across political differences joined together to set the fundraising agenda for 1946. This would be the first full year of fundraising after the end of the war and money was urgently needed. Surviving Jews in Europe were scattered in Displaced Persons camps. They needed aid that could only come from America to find lost relatives, clothe and feed themselves, find temporary housing, and, ultimately, immigration options.

The import of the 1945 session was not lost on those in attendance. They set forth a $100,000,000 campaign – an unheard of, unprecedented, “ridiculous” amount – that UJA managed to exceed in 1946.[1] The leaders also filmed parts of the conference, using the recordings in fundraising materials to support the “Year of Survival” campaign. The resulting film, “Battle for Survival,” was narrated by Orson Welles and made the case for extraordinary giving by juxtaposing images of Jews in Europe with speeches from the conference. The images are striking and moving, but it’s the lone female voice in the film that echoes for me today.

In her speech at the central event of the conference, Adele Levy, Chairman of the UJA National Women’s Council, underscored the urgency of UJA’s work. But, what resonates for me now is her plea for sacrifice. She declares: “Not one of us, including myself has ever made one real sacrifice for this cause. Some of us have felt very good.  Some of us have felt that we have given generously…Has one of us sacrificed something that we really wanted in a material sense? For these are suffering, bleeding, starving persecuted people. And I think the answer is no.”[2]

The images from detention centers around the U.S. are not that different than the images of DP camps where Holocaust survivors awaited immigration. They are images of children wearing ragged clothes, of men and women carrying loose bundles seeking refuge. When I see those images, I hear Levy asking: have we sacrificed enough? Have I, in fact, sacrificed anything? What have I lacked because I chose instead to aid those in need?

Levy stands in front of her community – the only woman to do so at that conference – and calls for greater action. She calls on the leaders of the UJA and on each individual American Jew to dig deeper. She asks that they convert their anger, frustration, and sadness into funds. She asks that they support the work of the JDC and the UPA and the National Refugee Service because they had the infrastructure and experience to do the work that needed to be done.[3]

Today, it is not Jews knocking at the gates of America demanding freedom and opportunity, but I am still responsible. I must still ask if I have sacrificed enough for those seeking refuge from violence and persecution.

And, so, Levy’s voice echoes across 70 years. As she knew then, of course the answer is no. I have not sacrificed enough; I have barely sacrificed at all. But, these are still “suffering, bleeding…persecuted people” and there is more to be done. I have started by activating my community to get involved, to march and give. And, I have listened to Levy’s call: I have given financially to organizations I believe in as a way to amplify the resources I have to give.

I am grateful to individuals and organizations that continue to act in big, public, impactful ways. To the celebrities who use their platforms to inspire others. To the leaders and lawyers who are working to get children released from detention centers and reunited with their families.

But, those public acts do not make seemingly small financial donations meaningless. Even small donations are essential. Just as Levy recognized in the wake of the Holocaust – the only analogue we have for the scale of the refugee crisis today – financial donations from Americans across the country enable experts to do their work. They provide salaries for staff, travel costs for individual refugees, funds for material goods like blankets, clothes, shoes, operating costs, and more. The organizations we all support are built to do this work. They have forged relationships, expertise, understanding, and workflows. The leaders who run these institutions likely hoped the scale would never reach today’s reality – but they are built for these moments. And, our work is to support them. To give them funds to keep going.

Small donations also function as a barometer of public outcry. Accumulated gifts of only a few dollars demonstrate the reach of an organization. It is not only the financial total that matters as battles are waged on the ground and in the media. The number of donors, just like the number of calls and letters that fill the offices of elected officials, embolden any effort. They strengthen arguments by demonstrating communal support. Small donations are your votes in the politics of civil society.

I had a conversation recently with a young women who felt – as many of us do – discouraged and disheartened by recent immigration policies. She said that she was doing the very least she could by donating small amounts to a few organizations. She is in her first job out of college, working as a contractor – without job security. So, she was using what resources she had to say no more; to say, I will not stand for this. This is not the “very least” she could do. Giving money as a way to voice our values is not nothing; it is not “least.” It is often exactly what organizations need – because who will train armies of volunteers or sort mountains of donated goods? I tried to reassure this young woman that making financial donations – even if they feel easy because they have been rendered seamless online – is a meaningful form of activism.

Of course, I’m trying to reassure myself as well. In light of Levy’s call to sacrifice, I am struggling. I’m struggling to act publicly in a way that comports to my values and employs my historical training. I’m struggling to be present for my family while still enraged by the separation of migrant families and so many others. I’m struggling to do more and still show up for my job and my life. So, am I sacrificing? Maybe not. But, I’m acting. And I’m choosing to take another thread of Levy’s call to heart: I am acting within the institutions that I trust. I’m donating to a handful of organizations – local, national, and international – that have proven they will do this work. They have been doing it for years and will continue to do so when our collective attention has moved on. Perhaps we – as a country – are losing faith in the institutions of government, but I have not lost faith in the institutions of civil society. They were crafted in the spaces between government reach and they will continue to do the work to fill in the gaps of our government and the moral failures of our political leaders.

[3] The United Jewish Appeal was, and remains, an umbrella organization. Funds raised through UJA support a range of Jewish organizations and efforts. In 1946, the three main recipients of UJA funds were The Jewish Joint Distribution Committee (JDC), the United Palestine Appeal (UPA), and the National Refugee Service (NRS). In 1946 – after this meeting – the NRS merged with the Service to the Foreign Born Department of the National Council of Jewish Women to create the United Service for New Americans. In 1954, the organization merged with HIAS.