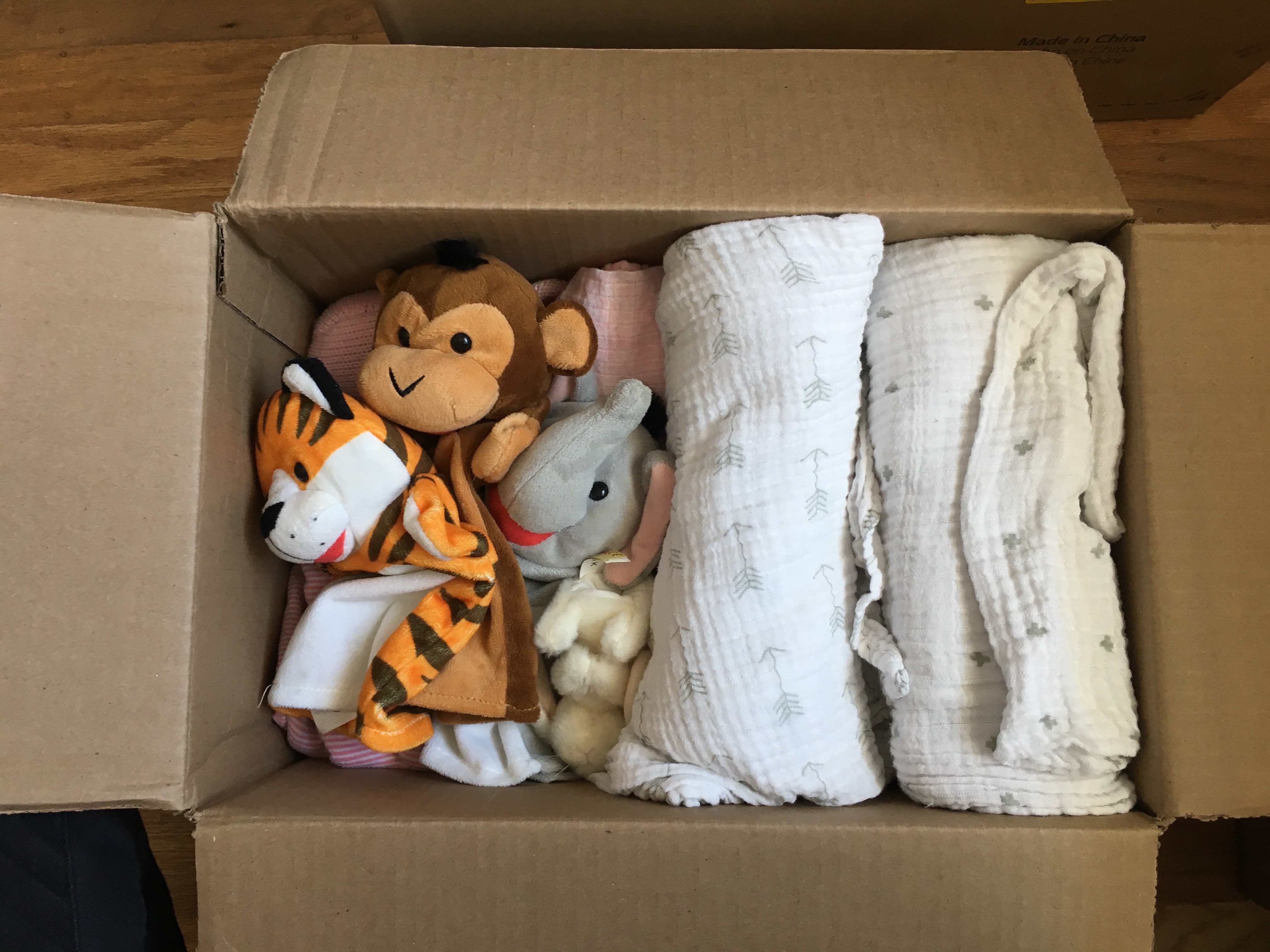 This weekend, my commitment to action continued. But, I am also committed to my family and being together. Could I turn away from Twitter, from the news? Could I put my toddler to bed without hearing the cries of other children going to bed without the comfort of their mothers and fathers? Here’s what I came up with.

I collected goods from our house today – toys and blankets and toiletries (both new and gently used) – and sent them to a Reform Synagogue in McAllen, TX. It was a way to contribute tangible goods to detainees and separated families and also to demonstrate to my daughter how we can act in the service of others. She helped me fold blankets and pack them in a box. (To be fair, she did more unpacking of boxes than packing.) And, we got to talk – in whatever way she could understand – about sharing with others.

But still: donating goods can be a problematic action. Often, it causes more difficulty for the organization collecting and distributing – large in-kind gifts or donations could be more helpful for everyone. One historical example from my research stays with me: in the wake of World War II as Jewish (and other) organization collected used good, collection depots became overwhelmed with materials and European depots became frustrated by goods that were inappropriate for Displaced Persons camps or so beat up that they could only be used as rags. Some additional context: The Joint Distribution Committee ran a collection project called Supplies for Overseas Survivors (SOS) for 3 years. Communities across the United States collected nearly 26,000,000 pounds of relief goods between January 1946 and December 1949 – all of which was sent to Displaced Persons camps and other postwar sites across Europe. The scale of aid was immense – and yet, memos from the European distribution sites repeatedly note that high-heeled shoes, gowns, and fur coats were unsuitable for the conditions of postwar Europe. In 1948, SOS stopped collecting used goods all together and worked to provide new goods – donated directly from suppliers – to the DP camps of Europe.

As I think about donating goods, I think about these logistical intricacies. And, I also think about this details: Adele Levy, chairman of the UJA National Women’s Division, reported that, upon visiting one JDC sponsored children’s home in Paris, there were “long rows of tiny fur coats. They were coats which the furriers guild of Paris had contributed…it was somewhat incongruous to see these tiny tots running around in fur coats and shoes that were full of holes.”[1] FUR COATS! Fur coats for children who had lost everything.

And, yet, I think of this too: when nine-year old Irene Guttman was living in a children’s home in France after World War II, she received a pair of red sandals from a JDC delivery – perhaps a direct result of SOS activity in the U.S.. 50 years later, in an interview by the US Holocaust Memorial Museum, Irene vividly remembers those red shoes. In the interview, she recalls how badly she wanted those shoes and even though they were too small, she wore them. Irene said:

“I had to have the red shoes.  I remembered sandals. I remember these were with little holes in them, like a shoe sandal.  I had to have them. So, when the children tried on the shoes I said, “I want those shoes.” They were too small for me but I said, “They fit great.  I like them, I love them, they’re my shoes.” And because of this, very shortly after that, we took a long walk into Paris, or went for a really long walk, and of course, you can imagine what happened to my feet.  I had blisters. My feet were bleeding. I was in so much pain that the head mistress had to actually take me in Paris to buy me a pair of bigger shoes. I got white. I got white. They weren’t red, but okay, but they weren’t brown.  I hated brown, and that’s all that I had had before.”[2]

It is with Irene’s memory in mind that I packed a pair of gold sandals into one of the boxes I sent out this weekend. I know they are “unsuitable” for almost any conditions. I know they are not what children separated from their parents or even children still with their parents, but trapped in the labyrinth of US immigration law need. And yet, perhaps they can provide some joy to a child who is seeking happiness in a world of brown. It is also in the spirit of Irene’s memory that I packed those boxes at all. Because seeing those red shoes was not only a jolt of color, it was a sign that people somewhere were thinking of her and working to help.

I was looking for inspiration today, so I donated to Al Otro Lado to support their work assisting asylum seekers at the Tijuana Port of Entry. After reading this exploration into their work, I’m amazed and in awe of the sacrifices individuals are making to fight against the inhumane immigration policies of our country. [3] What stood out to me most was the repeated action of immigration officers to deny asylum seekers entry. The sustained attention and commitment of immigration lawyers and advocates to aid people seeking protection and opportunity in the US is yet another reminder that the work of supporting refugees, immigrants, and asylum seekers has been and will continue to be urgent even after our current attention fades.